In our previous articles, we were primarily looking at how an attacker would create exploit code to take advantage of vulnerabilities in a computer system. These articles will carry on where we left off, having just compromised a host on the target network. The below diagram shows the initial connection from the attacker’s host to the compromised host which is running an FTP server.

We will be looking at techniques to elevate our privileges on the compromised host including session token hijacking and extracting plaintext logon credentials. Please note, that RFC 5737 IP addresses have been used in the examples, with 128.66.56.1 being allocated to the attacker’s system, and 128.66.77.89 for the victim host’s internet facing address. To begin with we’re going to download a Remote Access Trojan (RAT) to the system to ensure we have a stable remote connection. For this example, we will be using a Metasploit (www.metasploit.com) Meterpreter Trojan, as this allows us to perform a number of functions to gain further access to the network. Let’s start by creating the Meterpreter payload using the Veil Evasion Framework (https://www.veil-framework.com). By using Veil, the Meterpreter payload will be able to execute without being detected by common anti-virus software. The Trojan generated will connect back to the attackers system over the internet on port 443.

We can download the Trojan from our attacker’s system on the internet to the compromised host using Microsoft’s Background Intelligent Transfer Service (BITS), as shown in the figure below:

Figure 2: Downloading and executing the Trojan

From the attacker’s system, we can see we have received a connection from the compromised host:

Figure 3: A session is created on the attacker host

As per the figure below, we now have an outbound connection to our system from the compromised host using a Meterpreter session. In the next part of the series, we will elevate the privileges we have on this host to gain further access. 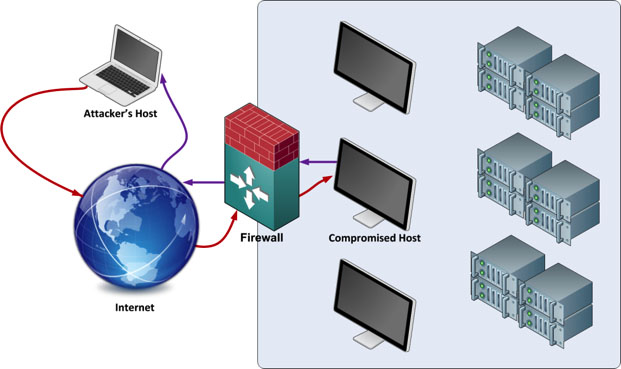